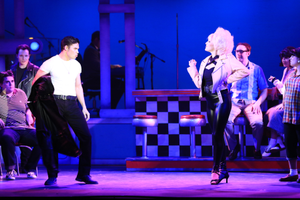 Broadway Palm Dinner Theater, located in Fort Myers, Florida has a longstanding history of putting incredible shows on for the community since 1993. The Prather family, including Tom, Deborah, David, and Will, love to bring entertainment to life while allowing guests to feel at ease with dinner and drinks.

To date, their attendance has reached over 3,800,000 people. With numbers like that, it isn’t surprising that Broadway Palm is going strong in its 28th season.

Broadway Palm Dinner Theatre can seat 448 guests and features full-scale professional Broadway musicals and concerts. Throughout the year, they perform 8 main stage shows, 4 child’s theatre productions, and a number of concerts, while also hosting many functions, meetings, and special events.

Be sure to check out Broadway Palm's Promo Video to get a glimpse into what they're all about!

We were able to catch up with Melissa Vogt, Director of Sales and Marketing at Broadway Palm, who answered a few questions to help us get to know Broadway Palm even more.

What is Broadway Palm Dinner Theatre? How would you describe it to a friend?

Broadway Palm is Southwest Florida’s Premier Dinner Theatre. The theatre’s season features the best of Broadway combining your favorite shows of the past along with the most recent musical hit sensations. Broadway Palm features nationally selected performers, dazzling sets and costumes, and a live orchestra. In addition to the main stage, there is the 100-seat Off Broadway Palm Theatre, children’s theatre, a concert series, numerous special events, a lobby bar, gift shop, and art gallery.

When and why did you start the business?

Will Prather opened Broadway Palm Dinner Theatre in October of 1993. His parents, Tom and Debbie Prather, owned and operated a dinner theatre in Lancaster, PA. After graduating college, Will decided to join the family business and open a second dinner theatre. The family vacationed on Sanibel Island and believed Southwest Florida would be a perfect location.

What's something you wish people knew about your business?

Personally speaking, what is your favorite thing about your business?

Our mission statement is “Providing exceptional entertainment and customer service that creates a fun and memorable experience while enriching the communities we serve.” That sums it up. We are in the business of making people happy and not only do we bring happiness to our customers through our productions on stage, but we are also extremely involved and invested in our community.

What is a common question you get? Your answer to it?

When are you going to be bringing Hamilton to your theatre? What a lot of people don’t understand is that we have to work with royalty companies to obtain the rights to the musicals we produce. If a show is on Broadway or there is a national tour out on the road, regional theatre licensing typically isn’t available.

What's one of your most memorable moments while working there?

Personally, my most memorable moment was when Hurricane Charley hit. It was my first experience seeing the owner’s and my coworker’s generosity and compassion. Will Prather put out calls to his management team who put out calls to their employees. Those who were able, came in to cook and serve all of the food that was in the theatre’s freezers for employees, line workers, first responders, and ANYONE in the community that needed a hot meal. Since then, I have watched him jump into action after Hurricane Irma locally, Hurricane Dorian in the Bahamas, now during the pandemic and countless other times. Even when we’re struggling as a business, Will finds a way to give back however he can. It’s extraordinarily special.

Are you involved with or do you support any local nonprofits, community organizations, or causes?

Do you have any upcoming events, specials, or new products/services that people should know about?

A BRONX TALE (April 15 – May 22, 2021): This hit crowd-pleaser takes you to the stoops of the Bronx in the 1960s where a young man is caught between the father he loves and the mob boss he would love to be. Bursting with high-energy dance numbers and original doo-wop tunes, A Bronx Tale is an unforgettable story of loyalty and family. This streetwise musical is based on Academy Award® nominee Chazz Palminteri’s story that The New York Times hails as “A Critics’ Pick! The kind of tale that makes you laugh and cry.”

BEEHIVE: THE 60s Musical (May 27 – June 26, 2021): Take a trip down memory lane with this exciting and colorful salute to the powerful female voices of the 1960s. The talented cast will sing and dance to hits made popular by the Chiffons, the Supremes, Aretha Franklin, Connie Francis, and more. Beehive includes 40 beloved songs that take you on a journey through the look, sounds, and feel of the 1960s such as My Boyfriend’s Back, Son Of A Preacher Man, Me and Bobby McGee, R-E-S-P-E-C-T and It’s My Party, and many others!

GREASE (July 1 – August 14, 2021): Grease is the word! Travel back to Rydell High and the hot-rodding Burger Palace Boys and their gum-snapping, hip-shaking Pink Ladies. Head “greaser” Danny Zuko and new girl Sandy Dumbrowski try to relive their summer romance as the rest of the gang sings and dances their way through Greased Lightnin’, Summer Nights, Born to Hand Jive; We Go Together; Look at Me, I’m Sandra Dee; You’re The One That I Want, Beauty School Dropout and more!

FARCE OF NATURE (June 3 – July 25, 2021): A Southern-fried farce about the Wilburn family of Mayhew, Arkansas, and their struggling family fishing lodge, the Reel ‘Em Inn. A motley collection of flawed characters hide, lie, disguise themselves, cross-dress, and slam doors while trying to figure out the source of an awful stench. In the chaotic climax of this one outrageous day, love blossoms, truths are revealed, and the lives of the family, guests, and gangsters alike change in surprising ways.

ROBIN HOOD: THE MUSICAL (Selected Matinees April 23 - May 16, 2021): The merry musical adventure about Robin Hood, the outlaw of Sherwood Forest who does all the wrong things for all the right reasons. When Robin Hood’s childhood sweetheart Maid Marian is forced to marry the evil Prince John, it’s up to Robin to stop the marriage, defeat the mean sheriff, and secure Nottingham.

THE TRUE STORY OF THE 3 LITTLE PIGS (Selected Matinees July 9 – August 13, 2021): There are two sides to every story and when the Big, Bad Wolf takes the stand in Piggsylvania’s Trial of the Century, his voice is finally heard. Will the pigs’ splashy puppet show make a puppet out of justice or is the wolf’s catchy song and dance about a sneeze gone wrong all razzle-dazzle? 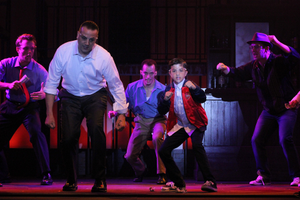 A Gentleman’s Guide to Love and Murder

No Claus For Alarm

11:30am · Broadway Palm Dinner Theater
View All Add Your Event